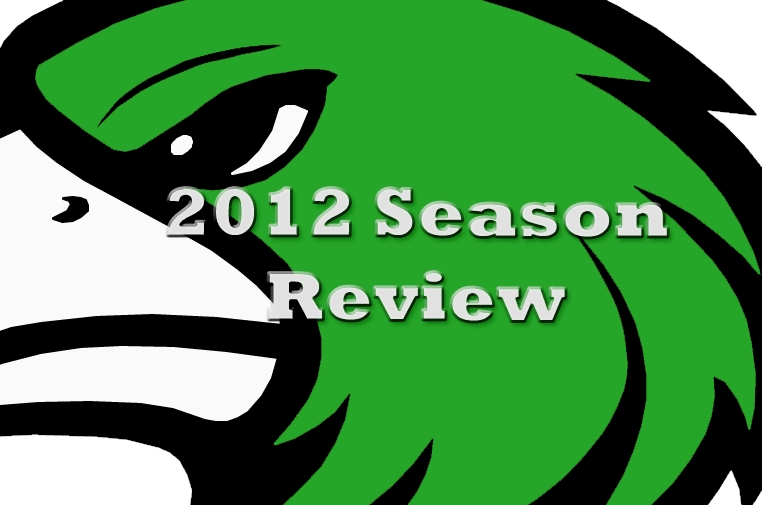 The 2012 Falcon squad had big shoes to fill. Coming off a school record tying playoff run and sending seven players to the college ranks, Falcon fans knew it would beÂ difficultÂ to have similar success. However, the 2012 team poured their heart into the game and went two rounds deep into the playoffs, one win away from trying the school record. Let’s take a look at how they did it.

The Falcons opened the season with a Thursday night TXA 21 TV game against Richardson Pearce. This game served to be the coming out party of the junior running back Tony Green whoÂ accruedÂ 115 yards on 33 carries. The Falcons struggled early on, giving up 20Â consecutiveÂ points to a high-flying Pearce team. However, after a Logan Stewart field goal, Roman Mitchell fumble recovery, and a Graysen Schantz blocked punt the Falcons scored 21 straight points in a span of 3 minutes and 15 seconds to take the lead and they never looked back.

The Falcons traveled to Frisco on the secondÂ straightÂ Thursday night game of the season. This was the Falcons first true test of the season as they were going up against a very talented squad led by Arkansas commit Lamar Jordan at QB, TCU commit Ranthony Texada at defensive back, and Baylor commit KJ Smith at defensive end. The Falcons found themselves quickly behind by a score of 24-0 before scoring a touchdown off a half back pass trick play near the end of the first half. The Falcons were still trying to form their team identity and it showed.

In the last game before district play, the Falcons began to find theirÂ identityÂ at Carrollton’s Standridge Stadium. The Falcons grinded it out by using a plethora of short passes and runs up the middle to tire the Trojan defense out for a decisive victory. Tony Green had a big game: 93 yards and 2 touchdowns on 25 carries. Roman Mitchell broke the game open early in the second quarter by taking a Marshall Dominy screen pass to the house from 83 yards out. The Falcon defense showed that they were for real by keeping the Trojans off the board for the first three quarters.

The Falcon defense once again showed everyone in the homecoming crowd that they meant business. Junior defensive back Ronnie Coleman stole the show with three interceptions to vault the Falcons to victory. Senior defensive end Graysen Schantz also had two blocked kicks that swung theÂ momentumÂ to the Falcons’ favor in key parts of the game. Senior wide out Bryce Williams used his size and speed to put two touchdowns on the board and junior running back Tony Green had another big night with 96 yards and 1 touchdown on 22 carries. Senior defensive lineman Luke Medlicott tore his ACL and was out for the season.

The Falcons traveled to Justin to face a similar Bobcat team. The Falcon offense struggled throughout the game, especially in the second and fourth quarters as they did not score in each quarter. The combo of tight end Brandon Flieschmann and running back Tylor Blake proved to be too much for the Falcon defense as Flieschmann paved the way for Blake’s 194 yards. The Falcons began to mount a comeback in the third and fourth quarters, eventually tying the game in the third quarter, but the wind was taken out of their sails by a 92 yard run by Blake in the fourth quarter.

The halfway point of theÂ gauntlet, this appeared to be a winnable game for the Falcons as Rider’s quarterback, Ohio State commit JT Barrett, was out for the season with a torn ACL. However, the Raiders stuck to their single-wing offense and were led by Domanic Thrasher and DJ Arnold. The RaidersÂ accruedÂ 253 yards on the ground. This was a game that the Falcons continued to shoot themselves in the foot. They had eight penalties for 84 yards that killed momentum and allowed the punter to run for a 63 yard touchdown after the snap went over his head. It was “one of those games” and it dropped the Falcons to a .500 record.

The game vs Guyer was easily the most anticipated game of the year. Falcon Stadium was sold out and tomfoolery was taking place between both student bodies in the days leading up to the game. The FalconsÂ deferredÂ to begin the game and the kickoff was run back 56 yards and Guyer was off to the races. Guyer finished the first quarter with a 21-0 lead and didn’t take their foot off the pedal. Another Lake Dallas special team mistake led to a 48 yard Guyer punt return and two plays later a touchdown. On the next drive, the Falcons tried a fake punt to regain momentum and were stuffed for a one yard loss. The Falcons tried to play catch up during the entire game and could never get enough traction to mount a comeback.

The FalconsÂ trekkedÂ up toÂ WichitaÂ Falls on a Thursday night. The goal of the game was to get back on track after a three game skid. The Falcons had to win the remaining three games in order to clinch a spot in the playoffs. Junior QB Brandon Simpson started at QB after Marshall Dominy was knocked out of the Guyer game and performed well by rushing for 142 yards and throwing for 55 yards more and a touchdown. Junior running back Tony Green left the game with a severe cut on his hand midway through the game which threw a wrench in the Falcon’s plan. However, the story of the night was the Falcon defense. The defense forced two turnovers within the Falcon 5 yard line. Josiah Tauaefa took the first fumble back 99 yards for a touchdown, and then ripped the second fumble loose from the running back’s hands to prevent the touchdown. It was a sloppy game for the Falcons, but they managed to win.

This game was senior night for the Falcons and also their 500th all-time game. They had to win the game to keep their playoffs hope alive. This game turned in to the Roman Mitchell show for good reason. Roman scored four touchdowns total, three of them came on his first four touches. Roman’s first touchdown was a 30-yard run on the first drive of the game. The next time Roman touched the ball was on a direct snap where he scored from 55 yards out. Soon after that, the Falcon defense forced a three and out and Roman fielded the punt and took it back to the house from 90 yards. Colton Lively, regularly a defensive end, scored a touchdown on a direct snap from the “box” formation as well.

The Falcons traveled to Azle with their playoff destiny on the line. The Falcons had to win by 6 or more points to clinch a playoff berth and they did just that. Coming off a huge game, Roman Mitchell was injured on the first play of the game. Regardless, the Falcons took an early 21-7 lead. It was a game of turnovers as the Falcons forced four, two of those were Josh Jackson interceptions. However, this game was defined by the final minutes when the Falcons were up by 8 points and the Hornets were trying to score on their final possession. An eight point differential was good enough for both teams to advance into the playoffs, but a Hornet field goal would knock the Falcons out of the playoffs. While Falcon fans were yelling for Azle to knee the ball and end the game, they tried to get within field goal range but they were shut up due to a stout Falcon defense.

After winning their final three games, the Falcons advanced to the playoffs and met Fort Worth Boswell in the first round at Northwest ISD Stadium in Justin. The Falcons handled a less talented Boswell squad with ease. Once again, the defense was the story of the game as thee Falcons shutout the Boswell offense. The Falcons were one of three teams at the 4A and 5A levels to pitch a shutout during the first round of the playoffs. The turning point of the game happened in the first quarter when the Boswell running back leaped across the goal line and fumbled the football. Senior linebacker Jacob Jones came out of the pile with the football and the Falcons never looked back, scoring 20 unanswered points.

The Falcons met Waco in the second round of the playoffs at Midlothian Multipurpose Stadium. Waco and Lake Dallas proved to be evenly matched teams throughout the game. The two teams traded blows throughout the game and it came down to the final minutes to decide the victor. The Lions were up 21-14 in the final minutes and were forced to punt. Senior defensive back Dante Basher fumbled the punt and the Lions recovered on the Falcon 7 yard line. The Lions were destined to score, but Dante Basher forced the fumble as the Lion running back was crossing the goal line and Josh Jackson scooped it up and returned it to midfield to set up the Falcons last drive. On 4th down with 36 seconds left, Marshall Dominy threw the game-tying touchdown pass to Josh Jackson from 14 yards out to keep the Falcons hopes alive. On the next kickoff, the Lions took the kickoff back into Falcon territory, within the Lions kicker’s field goal range and the wind was at his back. The Lions inched the ball closer and then Waco kicker Benjamin Diaz made the game-winning 38 yard field goal as time expired to knock the Falcons out of the playoffs.